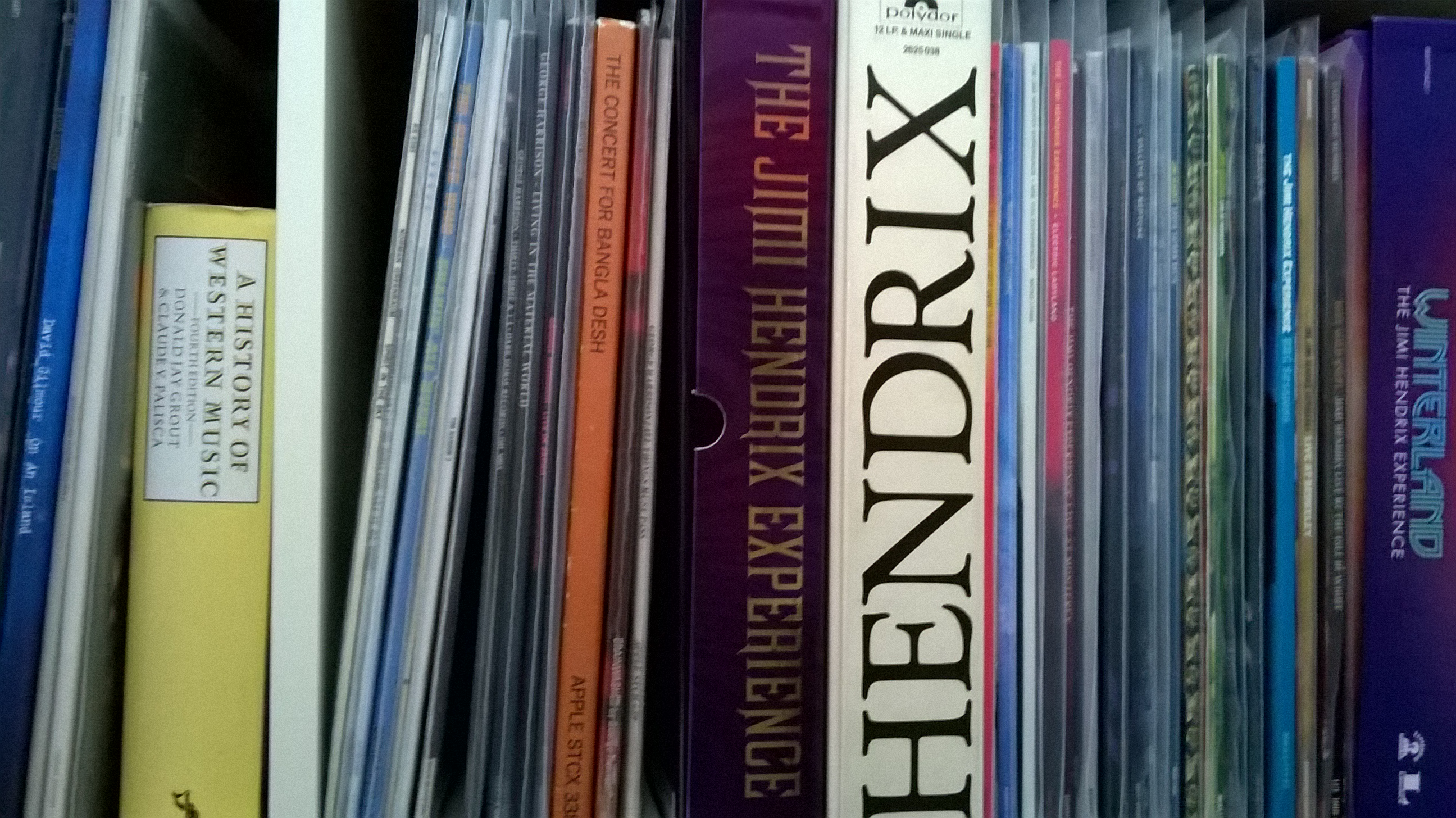 [Hendrix Squeezed in Between Harrison, G and the Hollies with David Gilmour just to the left]

White Elephant Records has closed its doors.  Those great days at the Record Fairs in Adelaide run by Music Palooza and Mr V at Semaphore are now history.  Whilst one part of this is beneficial – no more lugging 20 kilo crates through the driving wind and rain – there is a downside.  Will it be possible to get hold of those little gems that appear mysteriously at our local fairs on rare occasions.  At the time it makes you wonder where that particular album has been for the past 30 years especially if it does not appear to have been played and is in mint condition.  And there is that frisson of anticipation when you put it on your turntable and turn up the volume ever so slightly to get that full stereo effect, like hearing the opening chord of the Beatles song …Hard Days Night…..Blaaaang!!!! for the first time again.  Aah just wonderful…..Play it one more time Sam!

We all thought at one time way back that Duane Eddy had it all with his twanging guitar and his 1959 album The Twangs the Thang [London HA-W-2236], but fortunately in-sounds and music changes with each generation and we have come a long way since the early days.  These are some of the adventures to be had at White Elephant Records.  We propose to convert the website into a ripping Rock Historica Museo Musica exposing the White Elephant Collection, and exploring albums, artists and music, over the past century.  The Emporium is now The Collection.

RockBlogster – Historica in the making

RockBlogster is our prime potpourri of rock historica and immersion in our musical quest, starting in 1963 with Herb Alpert and The Lonely Bull, just before the great British invasion, and then we go all over the place.  We analyse the charts in Australia from Go-Set Magazine, [and local Radio charts] the UK Official Charts and Billboard in the USA to jog our memories.

So far we have rolled out commentary for 1963, 1964, 1965, 1966 – Sun and Surf, instrumental bands, the Folk Revival, the arrival of His “Bobness”, Liverpool, Merseybeat and early Beatles, Rolling Stones, Kinks and everyone else with long hair.  Our reports track the background events to the soundtracks of our lives – the Black Riots in America, the war in Vietnam, massive student demonstrations, Flower Power, street revolution and assassinations.  There is plenty to explore and the archives of Rolling Stone magazine and other musical vaults – Mojo, Q, Shindig, Uncut – provide a fertile resource for our wandering through the years.

In 2017 we explored Psychedelic Sounds and the Summer of Love in the break-out year of 1967.  2018 portrayed the darker happenings of 1968 and Aretha Franklin’s emergence as the Queen of Soul at Atlantic Records.  In 2019 we unearthed 1969 in all its glory with Woodstock and end of the decade shambles at Altamont.  Led Zeppelin rose like a new sun, Elvis revived, Zappa crashed the party, and the Beatles were still running hot.  In this year we blast into the 1970s – stadium rock, punk, disco, AOR and lush rock – into the valley of sighs.  Where will it all end?

We also propose to create special commentary on the Jazz Scene, the Golden Era of Lounge Music, and Stage and Screen pages – something for everyone.  White Elephant Records – we are still doing it.      Read On!!!!!!!!!!