John BurkePosted on August 5, 2015 Posted in Golden Era of Lounge Music — No Comments ↓

Since the 60s, with the advent of The Beatles and The Rolling Stones and other friends, when fans ran wild and girls screamed themselves to a standstill at airports, in streets, inside theatres, on roofs and completely drowned out the efforts of the four moptops at the August 1965 Beatles concert in Shea Stadium NYC, and the media has pressed wave upon wave of celebrity excess upon us, we tend to have forgotten earlier eras where our parents did the same thing.  When Frank Sinatra toured London in July 1950 the crowds of fans and the level of interest was extreme for the times. 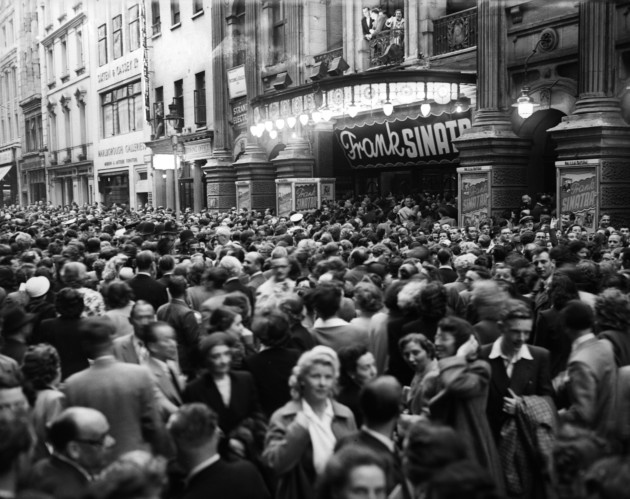 This picture is taken outside The London Palladium Theatre in London in 1950.  The Palladium is located near Oxford Circus and has hosted more Royal Variety Performances than any other theatre.  Although it is not the theatre where John Lennon hilariously quipped “will the people in the cheaper seats clap your hands and for the rest of you, if you’ll just rattle your jewellery” – that was at London’s Prince of Wales Theatre.

Trivia aside, Frank Sinatra was revered by mature fans and bobby-soxers alike, and his albums sold by the lorry load.  In celebration of his centenary year Frank Sinatra will be returning to the London Palladium, 65 years after he made his UK debut on the same stage in 1950.  Sounds like a case of reincarnation but these days anything is possible. However according to the Palladium blurb using “rare footage of the legend himself, a 24 piece orchestra, live dancing SINATRA: THE MAN AND HIS MUSIC is an extraordinary new multi-media concert celebrating one of the world’s greatest entertainers.” 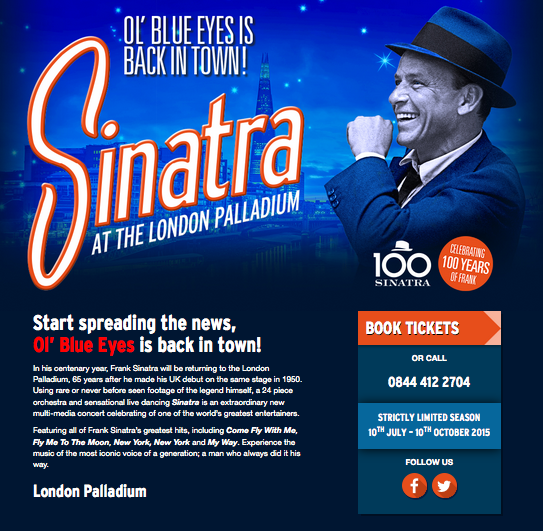 The show has been running since July and finishes on 10 October 2015 although West End shows sometimes run for years.  And the prices of the tickets are quite reasonable from £14.50 (where you clap your hands) to £125.00 (where of course you rattle your jewellery).

All of which brings me to the subject of this first episode of the Golden Era of Lounge Music – the recent release of Sinatra: London – a 3CD 1 DVD Collection of his songs and music – and a review of the release by Ian Penman in the London Review of Books.  Normally the LRB devotes itself to literature, politics, social comment and Arts.  Ian Penman, author and a former NME music journalist, brings a critical eye to bear on Frank Sinatra and his music and the golden era of lounge music, from big swing bands to the Rat Pack and beyond.  The review is wonderful, wide ranging and well worth reading.  If you click on the attached link you will be redirected to the website of the London Review of Books and to a free copy of the review.

A brief excerpt of Ian penman’s article is appended below to whet your appetite.

On 30 December 1942, Sinatra was brought on-stage, in an almost desultory way, by Benny Goodman.  “And now, Frank Sinatra.”  The 27 ­year­old Francis Albert Sinatra stepped up and history turned a small corner.  He was met by a tsunami of hysterical screams from a passel of young female fans.  Goodman was initially thrown, completely struck dumb in fact, then looked over his shoulder and blurted out: “What the fuck is that?”  Sinatra laughed and his fear left him.

Sinatra may have left damp seats and shredded hankies in his skinny-­bod wake but he was nobody’s idea of a teenager.  By the time of the Paramount ‘Swoonatra’ incident he was four years married to his first wife, Nancy, with one young child (Nancy Jr) and a second (Frank Jr) just about to arrive.  He dressed like other adults of the time.  (His sole concession to dandyism was a lasciviously Borromean, outsize bow­tie.)

His day­ to­ day social intercourse was conducted among hard bitten, resourcefully cynical musicians – we can just imagine the ribbings they dished out to young Francis about his undiscerning new fan base.  Sinatra’s bandmates were actually more bewildered than bothered by this latest development: despite his major rep as a real ladies’ man, no one had him pegged as the next Valentino.  This was a scrawny, underfed­looking Italian kid with big ears: there was definitely something of a semolina dough Mickey Mouse about his looks.  But he obviously gave off some subtle radar peep of rapt carnality, equal parts vulnerable boy­child and lazily virile roué. Unlike the pendulum­hipped Presleys up ahead, he could intimate sexual confidence with his eyes alone.  His sexual charge was like his song: underplayed, tinged with unflappable cool picked up second­hand in the shady cloisters of jazz.  Just as he could mine exquisite sadness from superficially happy songs, he managed to suggest bedtime fevers with a barely perceptible finger’s brush of his microphone stand.

Sinatra had none of the nice-­and-­easy­-does-­it spirit of his pal Dean Martin.  He was also deathly serious about his craft.  That may ultimately be what differentiates him from more than capable contemporaries like Tony Bennett and Mel Tormé: with Sinatra there’s less obvious technique on show and more personality.  Except, what is most characteristic about that personality is how unshowy it is: how it often feels deeply submerged, and hard to touch.  He can sound on the edge of something trance­like, ‘lost in a dream’.  Our favourite singers often have some scintillant flaw or uniquely cracked marker: hints of an old accent poking through; sudden unpredictable breaks in the calm, confident voice; cynicism interlaced with giggly childlike joy.  You hear nothing like this in Sinatra: at times his song is closer to a kind of resplendent anonymity; he never makes things too obvious, italicising what he thinks the listener ought to be feeling.  It’s notable for its lack of conspicuous drama, the antipodean opposite of today’s showboaty X Factor model.

Sinatra was one of the first musicians to see the long­-playing album as an opportunity for sustained mood music: a pocket of time focused entirely on one defining concept or tone; a quasi­-cinematic reverie for listeners to sink into and dream along with. You could make acase for Sinatra as one of the original ‘ambient music’ theorists, mixing up discrete tones into one balmy cocktail. For the music business the switch from live music to recorded in the 1950s was as much of a revolution as Hollywood’s changeover from silent cinema to the talkies.

Using the two-­sided forty-minute album, Sinatra began to spin his needle around a compass  of different themes: travel of course (Come Fly with Me, 1958), time and mortality (September of My Years, 1965), inner/outer space (Moonlight Sinatra, 1966), and most of all, romance and its discontents.  In lonely­guy collations like In the Wee Small Hours (1955), Sings Songs for Only the Lonely (1958) and (my personal favourite) No One Cares (1959), he makes wilting neurasthenia seem like the height of enviable urban glamour.  You want to be this white­gabardined, sad­eyed figure: a lovelorn cipher nestled among loveless shadows, crying into his shot glass, sighing under impervious stars.  You want to tarry inside the ports of call on the album sleeves: wood ­panelled saloon bar, modern apartment, skyscraper’s embrace.  And, behind the endless itinerary of glamorous jetset destinations, the key topography at the heart of it all: the space of recording itself. 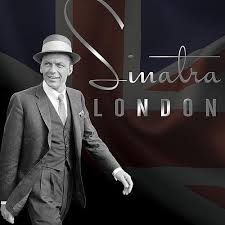 The review left me breathless, but with enough life to rush to the keyboard and order a copy of the collection from ImportCDs in the US.  The box has yet to arrive but the 3 CDs are well planned – originally released on November 25, 2014; the collection is the third in a series of city-themed box sets following  Vegas and New York.  This set includes the 1962 album Sinatra Sings Great Songs from Great  Britain recorded in London, as well as unreleased outtake material from those sessions and spoken introductions for each song intended for a BBC radio special.  The live material consists of a 1953 session from BBC Radio’s The Show Band Show, a full concert recorded in 1984 at the Royal Albert Hall, and two concerts on the DVD, both recorded at the Royal Festival Hall in 1962 & 1970.

Enjoy Ian Penman’s article Swoonatra and we will be in touch in our next look at the Golden Era of Lounge.  And if you have time, listen in to Frank Sinatra and Count Basie, together for the one and only time in 1962, with the bobby-soxer song My Kind of Girl.

My Kind of Girl 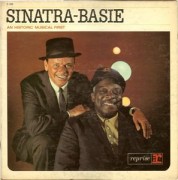