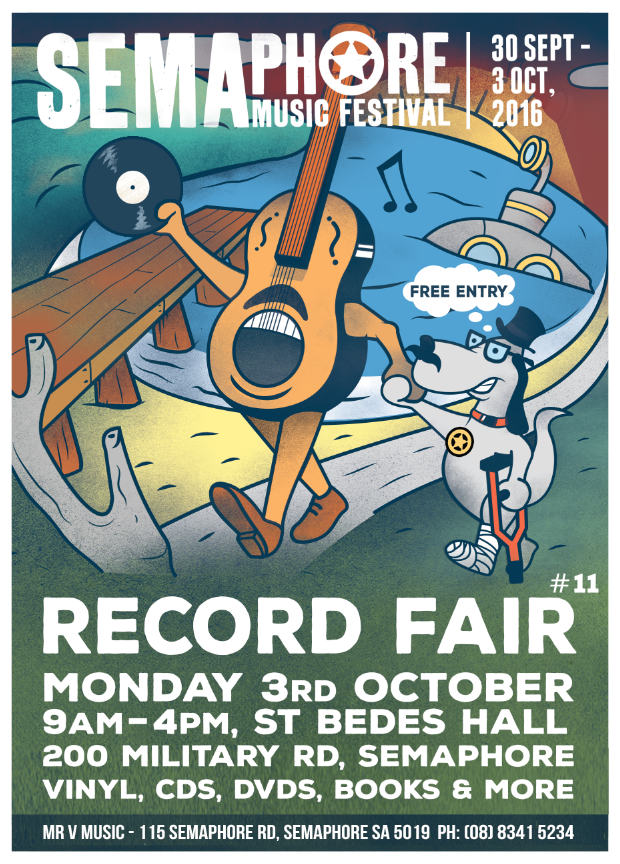 It’s that time of the year again.  The football finals are done and dusted and it’s time to enjoy a good day out at our favourite springtime Record Fair.  Yes the Semaphore Record Fair is on Monday, October 3rd, the last day of the Labour Day Long Weekend at the 12th Semaphore Music Festival.

The fair will be held at St Bede’s Hall, 200 Military Road, Semaphore between 9:00 am and 4.00 pm, although early buyers and fossikers are normally thumbing enthusiastically through record stacks at 8 O’clock.  Entry is FREE.  There will be about 36 traders with 70 tables of stock for sale, including heaps of vinyl records – country, blues, disco, new wave, rock, pop, classical, stage and screen, CDs, music books & magazines, comics, posters, DVDs and memorabilia.

White Elephant Records will bring about 2000 quality rock and pop albums to the fair.  And on the same tables, Graham will be back at an Adelaide record fair for the first time in 2016, following the tragic death of his father earlier in the year, and he promises to bring several crates chock full of well-priced new albums.

Vic Flierl of Mr V Music hosts the Fair and the St Bede’s parishioners provide snacks and drinks at very reasonable prices just inside the hall entrance.  Roll up be there.  Buy a thrill, a pie and that long lost vinyl gem.

And there’s more.  The Fair is just a small part of the annual Semaphore Music Festival, which is a four day live music event held over the October long weekend in the beachside suburb.  80+ bands will be performing in local venues over four nights and three days.  There is plenty to see and hear on the foreshore, and in the venues and pubs along lively Semaphore Road.  The band line-up, festival information, and tickets can all be checked out on the tantalizing Semaphore Music Festival Site http://www.semaphoremusicfestival.com