John BurkePosted on December 6, 2016 Posted in Jazz Scene — No Comments ↓ 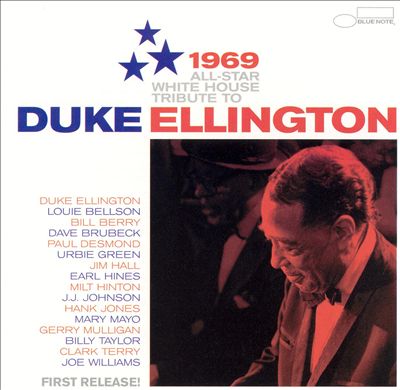 The first Sunday Jazz Cafe program went to air on 4 December on Radio Adelaide between 10:30 am and midday.  It was good to have some jazz music back on Radio Adelaide during the day time.  Since the demise of the daily midday program Jazz On the Terrace in August 2016, Prime Time Jazz  has been the only  jazz music show on Radio Adelaide running on Thursday evenings.  Goodbye to all that we are back in business.

Sunday Jazz Cafe is a light bright program which presents a wide variety of jazz music – the Blues, swing, bossa nova, Latin, smooth, West Coast, soul, funk, modern and classic jazz.  One of the tracks played was from an album titled 1969 – All-Star White House Tribute to Duke Ellington.  This album was not relased until 2002, 33 years after the preformance at the White House and there is an interesting story behind the evening on 29 April 1969 and the eventual release of the album.

MUSIC; A New Revelation from the Nixon White House

“On Tuesday, a tape that contains startling new revelations about the early days of Richard Nixon’s White House will be released.

Sorry, folks, it’s not what you think.

The release is an album from Blue Note Records, Duke Ellington 1969: All-Star White House Tribute. It was recorded at a black-tie dinner and jazz concert given in the White House by President Nixon on April 29, 1969, to celebrate Ellington’s 70th birthday and award him the Presidential Medal of Freedom, and it has never been made available.

The music is every bit as good as the line-up. But the release date is some 33 years late.  Therein lies a story of mid-20th century America and of two individuals whose lives told much of that story: Ellington and Willis Conover, who was obscure in this country but famous in the rest of the world for his jazz program on Voice of America, which ran for 40 years until he died in 1996.

Conover did his program six nights a week, exercising his impeccable musical taste and his unmistakable voice. Both he and the broadcasts were apolitical. Yet during the cold war, the programs attracted millions of listeners in the Soviet bloc to the inherently subversive, freedom-celebrating sounds of jazz, and Conover knew that the programs moved his listeners in more than the strictly musical sense. Because Voice of America was prohibited by law from broadcasting within the United States, Conover and his influence were almost unknown at home.

Around the time of Nixon’s first inauguration, in 1969, Conover hatched the idea for the Ellington party. I was then a special consultant to the president, and Conover conveyed it to me through Charles McWhorter, who had been an aide to Nixon when he was vice president.  I recommended the concept to the White House. Nixon agreed, adding the idea of the Medal of Freedom.

Conover then took charge of the proceedings. He recruited the musicians, selected the program and handled the myriad details. I, having joined the White House staff, was happy to be a sometime assistant to the impresario.

In 1965, just a few years before the White House party, Ellington had been recommended for a Pulitzer Prize for his contributions to American music. The Pulitzer board turned him down, and the snub created a brief scandal among New York’s cultural elites. Ellington, then 65, remarked: ”Fate is being kind to me. Fate doesn’t want me too famous too young.”

Now, on the evening of the party, here was Ellington in the White House, where his father had once been a butler, receiving from Nixon, of all people, the highest award the country could bestow on a civilian. More, he was receiving the award in the company of a remarkable gathering of American artists, including many who had created the art of jazz. Their collective presence was a fitting response to the Pulitzer pettiness. Ralph Ellison understood the significance of these contrasts. Two days before the party, he wrote in The Washington Star, ”That which our institutions dedicated to the recognition of artistic achievement have been too prejudiced, negligent or concerned with European models and styles to do is finally being done by presidents.”

The evening had its pleasures and incongruities, many of them collected in Doug Ramsey’s excellent booklet notes for the Blue Note release. As the guests arrived, Vice President Spiro Agnew sat at the piano in the reception hall and decorously played ”In a Sentimental Mood” and ”Sophisticated Lady.” During the reception, Gerry Mulligan came upon a strolling trio of United States Navy musicians playing ”Honeysuckle Rose,” unpacked his baritone sax and started a jam session in the hallway.

After dinner, Nixon awarded Ellington the Medal of Freedom, with the words ”In the royalty of American music, no man swings more or stands higher than the Duke.” Ellington leaned forward and delivered his traditional two kisses on each cheek to Nixon; the president, visibly startled, grinned sheepishly. Then came the excitement of the concert, after which Ellington brought the gathering to a breathless silence while he improvised a gentle piece dedicated to Pat Nixon.

After the chairs were cleared, a jam session began.  Virtually every musician in the house took part. Ellington played duets with all comers, including pianist Marian McPartland, the jazz producer George Wein and Willie (The Lion) Smith, Ellington’s old tutor in stride piano.  The jazz critics Dan Morgenstern, Leonard Feather, Whitney Balliett and Doug Ramsey were there, strolling in professional heaven.

Nixon asked me to bring Earl Hines to join him in the family quarters, where they exchanged reminiscences about the benefits of childhood piano lessons. It was by memorizing piano pieces, Nixon said, that he had developed the skill of speaking without notes. Shortly before 3 a.m., someone noticed Paul Desmond and Urbie Green solicitously pouring each other into a cab outside the White House. Everything worked that night, and the Ellington presence gave the evening its magic.

A few months after the dinner, in July 1969, Conover and I travelled together to the Soviet Union as part of the American delegation to the Moscow Film Festival. Conover took along a short documentary about the concert; the film had been hastily assembled by a private contractor. Though something of a mess, it featured enough Ellington to play to standing- room-only fans of Ellington, Conover and American jazz. I had my first glimpse of the worldwide popularity of all three.

After Moscow, Conover and I intermittently turned our attention to getting the audio recording of the Ellington concert released at home. Frank Stanton, the president of CBS and chairman of the United States Information Agency, offered to produce the recording through Columbia Records; all profits would have gone to a fund to have been established for aged and indigent musicians, of whom there were more than a few. Conover set out on the herculean task of getting the consent required from every participant in the concert.

There was one holdout — the guitarist Jim Hall, a gentle and witty man who, life being what it is, was a family friend. My brother Charlie had been best man at his wedding. Jim, a serious, steadfastly determined opponent of the Vietnam War, would not consent to anything that would bring credit to Nixon. Thus, our efforts ended for the indefinite future.

Conover and I also met from time to time to plot how to distribute the film of the Ellington concert. Here the obstacle was even greater than the problem of obtaining consents: we simply could not find the film. Over the years, we swept the White House, the United States Information Agency, the National Archives, the Library of Congress and every other hiding place we could think of. People cooperated with our effort, but all we could find were bits of film that were used in the abbreviated documentary. I sometimes daydreamed that the original reels were stuffed in a trash bag in some obscure closet of the building in which the maker of the documentary had committed his butchery. The joy of the search kept us going for a long time.

When Willis Conover died, I found someone admirably suited to carry on his work: Bill Kirchner, a jazz saxophonist, composer and writer. In 1998, we began to search for a commercial-quality copy of the original audio recording of the Ellington concert. We finally found one, neatly tucked away in the National Archives, and played it for Bruce Lundvall, the president of Blue Note, who agreed to produce the recording — subject, of course, to getting those consents.

After some two years of letters, phone calls and personal conferences with musicians, family members and estate representatives, the task was accomplished. Jim Hall, for the benefit of his fellow surviving musicians and of music history, gave his consent, though he made clear that this was not to be taken as a sign of any diminution in his dislike of Nixon.

The search was worth undertaking for the sake of the music, of course. The release also preserves a moment that embodied the central role of jazz in this country’s life and relationship to the world. Finally, it brought together and illuminated the lives of two authentic American heroes.

Ellington was an incomparable artist; he also seemed impervious to slights and refused to use his art or his fame for any but the most inclusive, constructive ends. Conover did as much as anyone to bring American jazz, as well as the American musicians who played it, to the rest of the world. He was required by law to be ”invisible” in his own country, but he never appeared bothered by the absence of honor and fame at home.

The two, between them, played roles in some of the largest events of the 20th century, including the civil rights movement and the cold war. Each man responded to the bitterness and partisanship of such events with an unfailing generosity of spirit.

I’d like to think that jazz had something to do with it.”

Since then a book has also been released in 2013 telling the full story of that evening, written by jazz author Edward Faine. 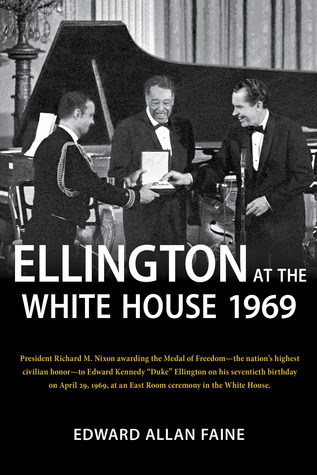 It was a night of pageantry, bonhomie, and brotherhood in the White House. A night of respect and recognition for a man and an art form. It was the night President Nixon awarded the Medal of Freedom to Edward Kennedy “Duke” Ellington—the first time the nation’s highest civilian honor was given to an African American and to a jazz musician. And it was the first time cameras were allowed in the mansion to televise an after-dinner soiree for the evening TV news and to film a documentary for distribution overseas, ultimately seen by tens of millions worldwide.

Ellington at the White House, 1969, presents the magical night, starting with the long road both Duke and jazz traveled to reach the White House, followed by how the event came about and by the night itself: the banquet, ceremony, 90-minute all-star concert of Ellington’s music, and the freewheeling jam session and dancing that followed.”

And you can see part of the concert in the following Utube film from the Richard Nixon Foundation.  It makes for some great nostalgic viewing and the President played “Happy Birthday” for the Duke!  As it should be.