The Strange Revival of Vinyl Records

Spotted the following in The Economist on 22 October 2019: 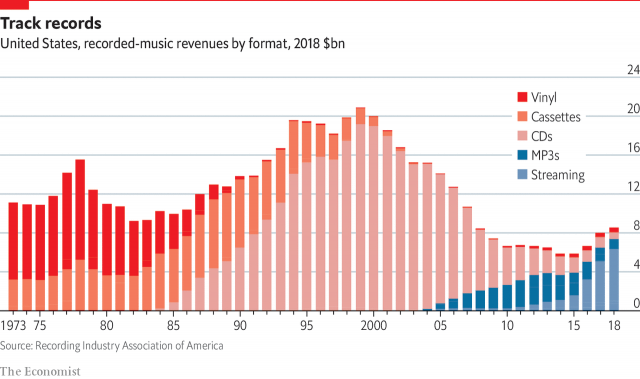 [Where have all the flowers gone? Gone to graveyards…Everyone….]

“The LP will be around for a good long while,” Patricia Heimers, a spokeswoman for the Recording Industry Association of America (RIAA), told the Associated Press in 1989.  Ms Heimers’ prediction may then have seemed tin-eared.  Sales of cassettes and CDs already far outstripped those of 12-inch glossy black platters.  In the 1990s vinyl almost vanished altogether. In 2005 a mere $14m-worth of records were sold in America.  But like an ageing rocker, vinyl is making a comeback. In the first half of this year, the RIAA says, sales reached $224m, up by 13% year on year.  In 2019, as a whole, they should reach $500m and exceed those of CDs for the first time since 1986.

Even so, vinyl still accounts for only 4% of the market for recorded music.  Sales of CDs have been declining fast.  These days paid-for streaming services, such as Spotify and Apple Music, bring in 62% of the industry’s revenue — which is in turn less than half of what it was 20 years ago in inflation-adjusted terms, despite a recent improvement.